Did you know that tomorrow (June 5th) is World Environment Day?! This day is organised by the UN and is intended to raise global awareness of environmental issues. I’ve been thinking about how best to share information I come across on environmentalism and climate action. It seems fitting to share with you some people I follow on social media because of their activism. They are trying to protect nature, campaign for environmental justice, and fight for climate change mitigation. We are familiar with the Gretas of the world, who are spotlighted as climate activist celebrities. However, so many people are doing equally great work, and are perhaps slightly lesser known in the public sphere. As such, in celebration of World Environment Day, meet seven inspirational climate activists that are worth talking about!

Of course, these are just a sample of activists, campaigners, and researchers doing great work. If this post interests readers, then I can showcase more people in future posts! While these individuals should be praised for their independent work, they are also part of a community, be that an organisation, online platform, or research group. As such, they can be considered as representatives of collective action and ideas. This sits well with the theme of World Environment Day – collective action for ecosystem restoration. While we need leaders and those empowered to share their voices in the foreground, in the background we need communities doing the work. All that being said, here are some cool people I think you should check out on Instagram, Twitter, read their work, or just do a little Google. 🙂

I follow Dr Kalmus on Twitter (@ClimateHuman). He is a NASA climate scientist and author of Being the Change: Live Well and Spark a Climate Revolution. What I like about Peter is that he speaks his mind and doesn’t sugar coat the urgency needed for climate action. His tweets on my feed are a stark, honest reminder that we need to keep fighting for change. As a science communicator, one of Peter’s main efforts is to shift culture aware from fossil fuel acceptance. Below, you can see how Peter feels about “days” like World Environment Day, and their tendency to create a false illusion that society cares.

I hate “days” like Earth Day and Biodiversity Day. Even though Earth and biodiversity are both my love and my job. Do you all actually like those “days” or are you pretending? To me they somehow only highlight how little our society cares about this cosmic life-giving oasis.

Dr Shiva is such an amazing woman and would be someone who I would invite to my dream dinner party. She is a champion of protecting biodiversity and justice for farmers in India. Her work is mainly on anti-globalisation, and bioethics in agriculture. Vandana has an impressive backlist of academic books, and helped create the organisation Navdanya, which champions sustainable agriculture and food sovereignty. I follow her on Twitter (@drvandanashiva)

Leo is a journalist and Director of Carbon Brief. I’ve mentioned Carbon Brief in my post Five Innovative Climate Change Resources. The way I engage with Leo’s activism is through weekly email newsletters, which are a great way of staying informed about current developments in climate matters. You can also find him on Twitter (@LeoHickman).

Sign up for:
📰 Latest developments in China
🔍 Context behind the headlines
📚 Extra reading on China
🔬 New scientific studies

Vanessa is an impressive Ugandan climate activist, and founder of the African climate activism organisation Rise Up Movement. I follow her on Instagram. She too is campaigning for an end to subsidising fossil fuels.

Dr Johnson is a marine biologist, and founder of the think tank Urban Ocean Lab. She is Co-Editor of essay collection All We Can Save: Truth, Courage, and Solutions of the Climate Crisis, and I admire her positive attitude towards the climate crisis. You can follow her on Twitter (@ayanaeliza) 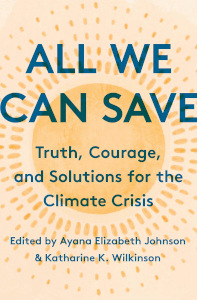 My Canadian readers might be familiar with Autumn already. For those of you who aren’t, Autumn is from the Wiikwemkoong First Nation in Ontario, Canada. She is an Anishinaabe Indigenous water rights and protection activist, the Chief Water Commissioner to be specific!

So, there you have it, seven awesome humans doing fantastic activism work in climate, biodiversity, and environmental justice. Why not check them out this World Environment Day?