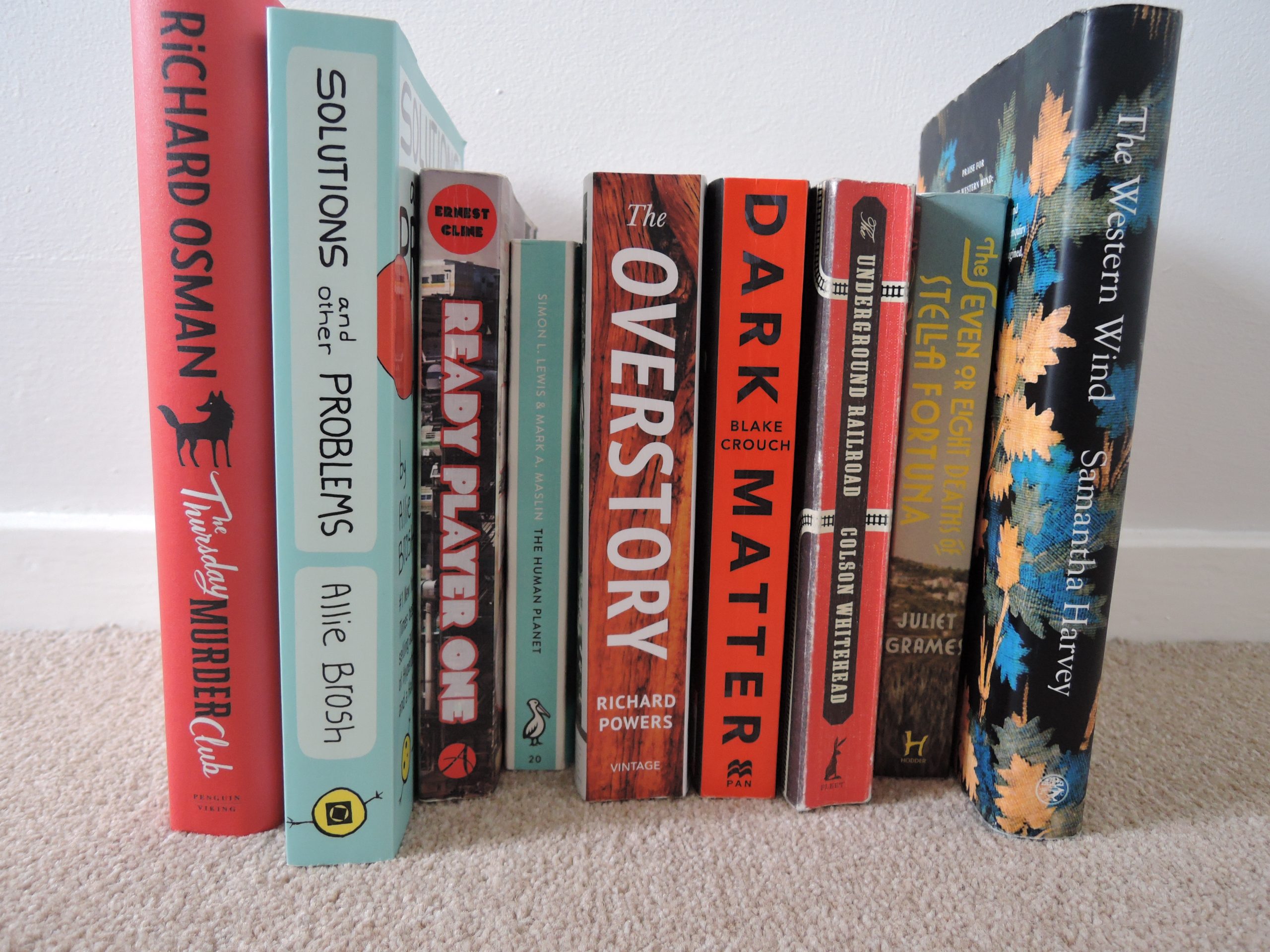 As I mentioned in my Goals for 2021, my aim is to read 21 books this year. Maybe it’s the fact that we’ve been in lockdown since Christmas, or that I’m waking up at 5:30 AM to look after Wilbur (who promptly falls back asleep), but I’ve had a lot of time to read! I’ve read 9 books, and I’m well on my way to achieving my goal. However, it’s not about the numbers. I’ve genuinely enjoyed reading this winter; I’ve devoured fiction and non-fiction, plus resources for my School of Climate Change (which I spoke about in: Five Innovative Climate Change Resources). Moreover, all except two of these books weren’t ones I had planned on reading this year. It’s been liberating picking up whatever book I fancy! Here are the books I read in winter 2021.

Solutions and Other Problems by Allie Brosh

I started the year off with a much-anticipated graphic novel. Allie Brosh is one of my favourite authors/creators, and her first book Hyperbole and a Half is a cherished therapy tool (see: My Ten Favourite Fiction Books). Although I didn’t connect as much with Solutions and Other Problems, some of the content was stomach-achingly hilarious, and other parts made me cry. It’s a five star (out of 5) read for me! The Western Wind by Samantha Harvey

This novel frustrates me. I struggled to get through it, and was glad to see the back of it… and now I think about it all the time. I thought The Western Wind was going to be a murder mystery, but I should have clued in that religion would be a main theme in this book. Firstly, it’s set in the medieval period, when religion was a main fixture of daily life. Secondly, the typeface on the cover eludes to the fact that God is a central “character”.

It’s set in an English village during the late 1400s around Shrove Tuesday, and is told in reverse time over several days. A man is swept away by the river, and the village is trying to figure out if it was an accident, a murder, or suicide. Yet, the book is actually about the village Priest, John Reve, and his struggles with faith, morality, and guiding his community. If you want a murder mystery, this book doesn’t quite cut it. If you’re looking for an introspective novel on one character which paints an accurate portrayal of medieval life then yes, it’s great! I gave it 3 stars mainly because I’m not into books about religion. That being said, I think about the protagonist Reve a lot, so it has made a lasting impression.

What can I say? It’s popular for a reason! This was our first work Book Club pick of the year. I like to start the year off with an easy read, which it was. The Thursday Murder Club is charming, and I don’t want to spoil it by saying too much. However, you’ll likely fall in love with the characters. Four stars from me! Ready Player One by Ernest Cline

Loved the film, loved the book even more! Ready Player One is such a wild ride and I guarantee you’ll love it if you’re into SFF (sci-fi fantasy). Cline does an amazing job at world building and has some fantastic characters. Dystopian fiction is my favourite genre, and eighties is my favourite type of music, so I’m not surprised that I enjoyed this novel as much as I did. Just to note, if you’ve seen the film and are thinking that the book will be exactly the same, it’s not. Some of the quests/challenges featured in the book wouldn’t have worked on screen, so these two renditions are, in many ways, different stories. Five stars and a firm favourite! A high school friend recommended this novel, and I’m glad I read it as it’s not one I would have immediately picked up. Initially, I thought the writing was a bit crap and I couldn’t connect with the main character (a College physics lecturer named Jason Dessen). Once the story gets going, however, this sci-fi thriller has you hooked! As the name implies, the story is about quantum physics, multiverse realities, and fate. I would say it’s best described as The Matrix meets Interstellar, meets Living with Yourself. I gave it 4 stars purely because the writing let it down a bit.

The Overstory by Richard Powers

I wanted this book to change my life. I wanted it to be a masterpiece. Unfortunately, Powers just didn’t pull it off. If a book is this chunky, I expect the length to have purpose and for the different narratives to connect in a meaningful way. I found it difficult to keep track of all the characters’ story lines. While some characters came together in an apparent way, this book left me thinking why some story lines were included.

For sure, this book is beautiful and there are parts which are utterly heartbreaking. Did I mention it’s about trees, environmental activism, and the destruction of forests and biodiversity? Powers’ writing is fantastically rich and emotive, the scientific aspects of the book are well-developed, and the structure of the novel is inventive. Nonetheless, like many other readers, I felt that this work just didn’t quite deliver on what it set out to do. I gave it 4/5 stars.

The Underground Railroad by Colson Whitehead

Wow. Just wow. Whitehead’s premise of an actual underground railroad facilitating enslaved people’s journeys north was fabulously creative. I loved the characters, I loved the writing, I loved the narrative. What struck me most about this book is the matter-of-fact descriptions of torture, assault, and trauma that took place during the slave trade era on southern plantations. The depictions are so utterly true, but haunting nevertheless. Apart from the fact that I found some of the sections graphic and difficult to read, I honestly think this book should be part of curricula. It won a load of prizes for a reason, and I 100% recommend it! 5 stars. The Seven or Eight Deaths of Stella Fortuna by Juliet Grames

This was our Book Club choice for March. When I suggested it, I was expecting this novel to be somewhat lighthearted or fantastical. Instead, we enjoyed an epic historical fiction spanning the First World War, through to the 1990s centered around an Italian family who emirates to America.

This book was much more serious and traumatic than I expected. Essentially, it’s a multi-perspective account of why the protagonist Stella is the way that she is, a sort of vindication for her. The novel is organised thematically by 7 (or 8) near death experiences. It’s such an impressive debut novel and is beautifully written. I enjoyed the themes of identity and motherhood, and felt that Grames superbly depicted rural Italian life, as well as the Italian-American immigrant experience. It was heartbreaking and powerful and it deserves more recognition and praise that is has received. 5 stars and highly recommend if you enjoy historical fiction spanning decades. Everyone in Book Club loved it! The Human Planet: How We Created the Anthropocene by Simon L. Lewis and Mark A. Maslin

I started this book in January and finished it at the end of March. I was expecting it to be a contemporary overview of the climate crisis. Instead, it’s a sweeping, though accessible, chronology of humans on Earth. The book covers geological time periods, early humans, the agricultural revolution, globalisation, the advent of the fossil fuel industry, to modern time. I already have a decent understanding of geological time, early humans, and history, and I therefore found this book a bit disappointing and surface level. I wanted to get my teeth into an in-depth discussion of recent human impacts on the planet, and a way forward. There were also two somewhat disjointed chapters in the book — one on geologists arguing about naming epochs, and the other about feedback loops — which I found distracting to the overall narrative. I gave it 3 stars. There you have it, the 9 books I read in winter 2021. Have you read any of these books, and if so, what did you think? What did you read this winter?